“The purest and most thoughtful minds are those which love color the most.” -John Ruskin, The Stones of Venice.

Like a shepherd caring for his flock, we strive to bring the customer the best classes, fibers, and yarns to nurture your designs.  All are welcome at Lambspun! 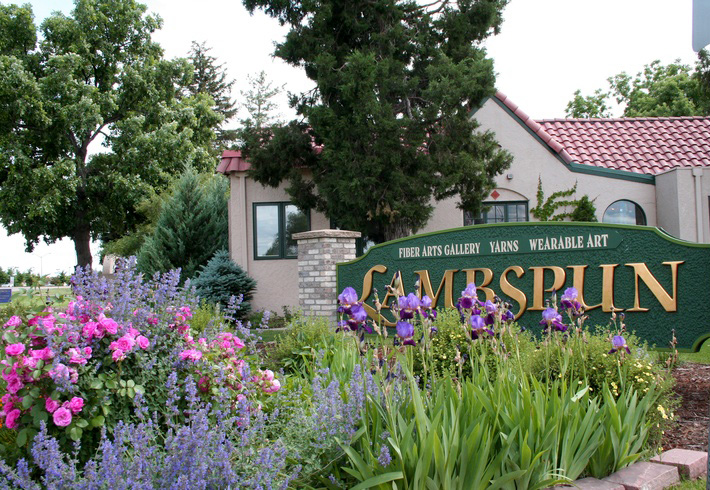 The site of Lambspun of Colorado™ and Cooper’s Back Porch™ is a unique and beautifully landscaped property that attracts thousands of visitors from many states every year. We appreciate your interest in the property, and welcome any suggestions to help the property owners maintain and preserve this striking community landmark. As major commercial development has crowded ever closer, this nearly 2-acre property has truly become an oasis of flowers, 70-year-old trees, grass, and buildings from a simpler time.

This historic farm complex is located on the southwest corner of Lemay Avenue and Lincoln Avenue in Fort Collins, Colorado. The Mediterranean style buildings and courtyard were built in 1937 on a Fort Collins homestead property. The estate consisted of a farmhouse and two associated outbuildings: a detached Carriage House and a small cook house and canning room building, now known as the Stone Tea House.

The farmhouse is a stucco structure with Mediterranean stylistic details. The house has a rambling plan covered by a complex, intersecting gable roof clad with red, semi-cylindrical ceramic roof tiles. Distinctive features include some arched window openings, steeply pitched gables, and two immense, stuccoed exterior chimneys. Several additions to the house have been designed in a manner compatible with the building’s original style while facilitating commercial use.

The Tea House on the south side of the courtyard is a remarkable structure in many respects. A visitor may first notice the massive, rustic exterior chimney on the east end made of uncoursed native stone. A built-in wood-fired cast iron oven and cook stove shares this chimney with a large fireplace. The fireplace is equipped with an iron swing-arm pot hanger. The building’s walls have a frame featuring welded trolley track “studs” salvaged from one of Fort Collins’ early trolley lines, possibly the Linden Street Trolley abandoned around 1920. The Tea House roof is covered with very unusual roofing material: red flagstone. The colossal steel trolley track interior wall members support this massive concrete and flagstone roof.

Originally Known as the Fisher Farmhouse

The main building was originally known as the Fisher Farmhouse. It was located on a 192-acre homestead parcel of farmland on the east side of the Cache la Poudre River owned by Mrs. Travis Hoffman. The original occupants were probably farmer Cliff O. Fisher and his wife Alice, who according to local legend may have acquired the property as a result of winning a card game. The Fishers, who married in 1920 in Timnath, evidently farmed the area that later became the Link-N-Greens Golf course, and owned the home until c. 1978. Cliff Fisher died prior to 1968, and after 1977 Alice Fisher moved elsewhere. She died 11 years later in a local nursing home. Steve Doerschlag occupied the Fisher Farmhouse in 1979.

The main building was soon converted to commercial use as one of the most elegant restaurant sites in the region. The location was at that time well outside of the city in a rural setting with a large cornfield across the street to the east, and hay fields to the north. From 1982-1987 the site served as a fine Italian restaurant operated by Berardi & Sons. Fresh herbs were grown in the courtyard garden, and many still thrive there. From c. 1988-1990 the building housed Bosco’s Italian Restaurant, operated by Joe Bosco.

By 1992 the property had been acquired by Steve Schrader, owner of Schrader Country Stores, who contemplated conversion of the property. That work was suspended in 1994 when Daniel and Shirley Ellsworth acquired the old farmhouse property, began restorations, and moved their fiber arts business, Lambspun of Colorado™, into the building. Soon afterward, the restaurant portion of the building received facilities for the Back Porch Café™, restoration of the stone Tea House was completed, and in 2001 part the Carriage House was adapted for expanded office and storage area.

The distinctive appearance of the property is enhanced by many large and lovingly maintained old trees, including Black Walnut, Oak, Cedar, Locust, Crab Apple, Mock Orange, and of course, Colorado Blue Spruce.

What our customers are saying…

“There’s no place like Lambspun.  You can travel the world — I have — and you won’t find a shop like Lambspun.  When I lived in Stockholm, my mother would give me a subscription to Spin Off.  In the back there was always an advertisement for Lambspun.  Then I moved to Fort Collins.  My neighbor saw me knitting and asked me if I’d like to go with her to a knitting shop.  She took me to Lambspun!  I’ve been their greatest fan ever since.”   —Svea

“I love your products.  Your products and people that work here are so good.  I will be a customer for as long as possible.”  —Arlene R

“I was just taking a spinning class out of curiosity…and instead became a fiber artist!  Here there is beauty, kindness, humor, encouragement, creativity, and helpful staff (and customers)!  I love that people of all ages, abilities, gender, and any level of skill and interests are welcome at the big table, or to find a quiet corner if one wishes.”   —Karen C